The Ghan from Darwin to Adelaide

Last time I travelled on the Ghan it only ran from Adelaide to Alice Springs but since 2004 the track has been extended 1,420km all the way to Darwin in the tropical north of Australia. 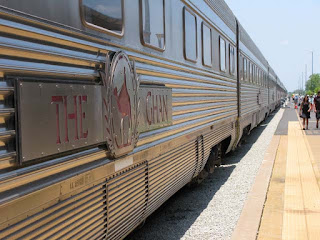 I boarded the 9am train at Darwin station which is 20km outside the city centre. Some people were still buying tickets but my internet booking waved me straight to my cabin. Checked in luggage is weighed & bags over 20kg have to be unpacked until they meet the weight restrictions; because this is lower than many airlines it can be a hassle for some passengers who pack to the airline limit.

There are plenty of travel options on the Ghan from Platinum service with a champagne welcome, Gold service with a tea/coffee welcome & Red service with a - snack bar will be open shortly - welcome. Sleeping is equally varied with a spacious cabin & double bed in Platinum class, modest space with easy access bunk beds in Gold class, almost acrobatic manouvers to access the upper bunk in Red sleeper & finally the chair sleeper option - this is the cheapest but it still beats the space usually provided by most business class airlines. These Red class day/nighter seats have greatly improved since I last used them, they're softer & recline further - to about 45 degrees. 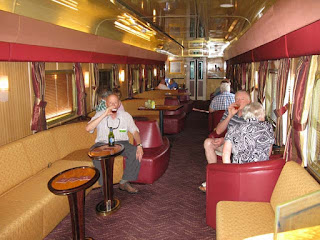 Gold service is slick & efficient from the comfortable & cleverly designed cabins to my wake-up morning tea in bed as I had opted for an early breakfast. The cabins in my carriage had been modernised but some still had the interesting pull down toilet & sink which are a way of providing more space whilst showering.

Breakfast, lunch & dinner are served in the Queen Adelaide restaurant car & tea/coffee are available all day. There is a definite sense of luxury in Gold class compared to the Red class I travelled in from Adelaide to Sydney.

We had a formal 'champagne' welcome to Australia & more specifically the Ghan after our 3 course dinner. Staff were almost apologetic that the landscape was exceptionally green due to the recent heavy rains as the continual references to the 'red centre' seemed slightly misplaced.

I saw my first kangaroo of the trip before we made our first stop at Katherine. The temperture was a blistering 38 degrees C but most passengers were still game for the whistlestop tours to the spectacular Katherine Gorge or into town for some shopping & one couple took a helicopter from the station for a ride over the gorge.

We arrived in Alice Springs on Sunday & as I had spent a week here on my last visit I just walked to the Sunday market in Todd Mall & had a couple of beers. I checked out that the Todd River was still dry & sent some emails from the public library that was open on a Sunday! 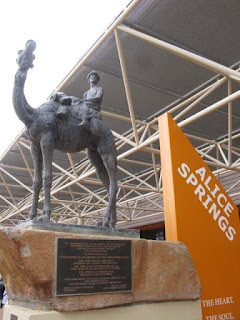 One of the train staff who also works for Penfolds on her days off hosted a little wine & cheese tasting session, that gave a good introduction to some of the pending charms of Adelaide's Barossa Valley.

Crossing the South Australia border the landscape is raw & intimidating but still spectacular. There are isolated Mulga trees, lots of scrub & spinifex, then an occasional sinuous line of trees following the line of a part-time river. Sometimes its as flat as a pancake & then suddenly the landscape folds up with deep crevices & rolling hills a popular spot for kangaroo & emu.

A sad feature of the journey is that smokers no longer feel welcome on the Ghan or the Indian-Pacific since they removed the entertaining & inoffensive tailend smoking capsule. That's where I met some of the most fascinating & oddball people on my last trip but Big Brother anti-smoking fanatics seems to be even more rife in present day Australia than almost anywhere else.
Posted by Peter at 23:26