Just about every visitor to Singapore stops by at Raffles Hotel - some just to take photographs of the dazzing white colonial facade or the famous 6'6'' Sikh 'doorman'. Even more people come to shop at the 44 exclusive shops in the Raffles arcade or dine in some of the 15 different bars & restaurants. 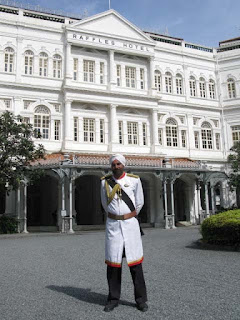 Few people pass up the chance of a genuine Singapore Sling, created by Raffles bartender Mr Ngiam Tong Boon in the early 1900's. It was originally conceived as a 'lady's punch, with a kick' at a time when it was considered unseemly for women to drink alcohol in public. For years it was a closely guarded secret, securely locked in the hotel safe, but now the secret is out:
30ml Gin
15ml Herring Cherry liqueur
120ml Pineapple juice
15ml Lime juice
7.5ml Cointreau
7.5ml Dom Benedictine
10ml Grenadine
A dash of Angostura Bitters & garnished with pineapple & cherry

But beware drinks, like holiday romances, are never the same at home so it really needs to be drunk in the ambience of Raffles Long Bar. The Long Bar is a 'peanut bar' & it takes a considerable effort for a litter conscious Brit to throw peanut debris on the floor. Apparently this is a hangover from the early days when rough & ready Planters frequented Raffles. 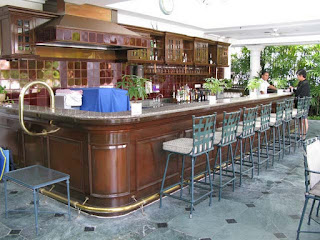 As Singapore's most famous landmark & an emblem of style & luxury Raffles has been designated a National Monument, to safeguard it from developers for future generations.

In fact during my short stay at Raffles I never made it onto the Singapore streets. Admittedly I've previously done the rounds of the usual touristy things but Raffles has an internal life of its own.
The all-suite accommodation is spectacular & I've never felt so at home in a hotel before. The large front door leading off the wide wooden balcony (with comfortable chairs & table for outdoor refreshments) leads in to a high ceilinged parlour with dining table, armchairs & discreet TV. This leads into the vast main room with an antique desk, King sized bed, more armchairs & all the usual facilities. After that comes a large double sinked washing come dressing room which has a separate bathroom & shower room off of it.

Personal butlers are standard and frequently enquire if there is anything you need. Sitting out on the balcony I had my mind read as the lady butler appeared with trays of tea & coffee just as I was thinking, 'humm, I fancy ....' - absolute genius!

Raffles covers an entire city block & 25% of the grounds are given over to nature & greenery. Outside my rooms were towering Livingstonia palms, fragrant frangipani trees, innumerable flowers and an immaculate lawn. 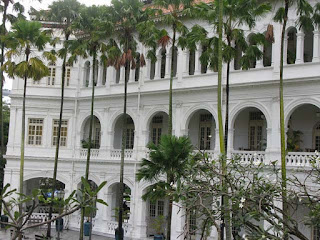 Breakfast, lunchtime curry buffet & afternoon tea are not be missed events of regal elegance in the Tiffin room. I never found the time or made the effort to use the rooftop swimming pool, theatre, spa or the gym.

The famous Bar & Billiard room has 2 full-sized tables although neither was set up for the out of vogue game of billiards. Someone had earlier told me the story of the tiger that had been shot under one of the billiard tables - which I found hard to believe. However, I managed to see a copy of the original Straights Times newspaper dated August 13th 1902 with an inside story headlined - A Tiger in Town'.

A tiger was shot by ....... but it was an escaped tiger from a travelling circus & it had sought shelter in the undercroft beneath the Bar & Billiard room building - not quite as exotic as the story has been re-told for generations. But its a good example of a half truth growing into a better story, no doubt with the aid of several stiff drinks.

Everything about Raffles Singapore is a one-off & no visitor to the city should dream of missing Raffles off their itinerary regardless of whether its for an iconic drink, an elegant meal, a luxurious stay or a simple photographic momento.