I took a Red class seat on the Indian-Pacific from Adelaide to Broken Hill, a 7 hour journey that was the most comfortable standard train ride I've ever made - few frills but more space & comfort than a first class seat anywhere in Europe.

Broken Hill is a quintessential outback town in the far west of NSW, near the South Australia border. Its a major stop on the Indian-Pacific rail route between Sydney & Perth; I had a brief wander around town 10 years ago & liked the place so much I was determined to come back one day & explore it in more depth - & here I am.

The next train doesnt come through for another 3 days & I've booked into the Palace Hotel which is famous as one of the film locations for Priscilla Queen of the Desert (1994). The Palace was built in 1889 but locally its more famous for its food which is excellent & evenings often get completely booked out. It has a fabulous 20 foot wide cast iron balcony overhanging the wide pavement & it wraps around the hotel. All the first floor rooms open onto the balcony which is perfect for watching the world go by as the sun goes down. 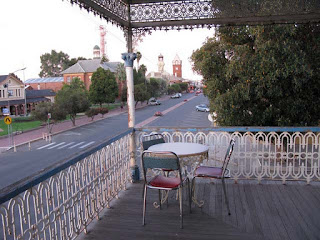 The interior is so kitch its hard to believe, until you see it - thanks to Mario Celotto who owned the Palace from 1974 & obviously loved 50's & 60's furniture & decor. For style it was like stepping back into my childhood house but I must admit I couldnt chuck the furniture & garish carpets away quick enough when I left home. I've seen some of the furnishings as collectors items on recent antique shows, I still wouldnt want it at home but its an absolutely one-off hoot.

Mario also painted a copy of Botticelli's Birth of Venus on the hallway ceiling after replacing the roof that blew off in a storm. It took him 6 months to paint & he became so obsessed he offered a $1,000 for anyone who would continue his watery theme - local aboriginal painter Gordon Whey was commissioned to cover the interior with dozens of extravagant wall murals that now smoother every inch of wall space in the public areas. It may not be high artistry but its an absolutely mind blowing sight.

Broken Hill grew up as a mining town after Charles Rasp stumbled across the world's largest silver, lead & zinc deposit in the early 1880s. By 1888 it had become a boom town & by 1907 it was the second largest town in NSW after Sydney. Mining is still a big part of Broken Hill life, its full of mining history & the unionisation of labour to combat the appalling conditions that miners had to endure.

I don't usually go on organised tours but the local Silver City Tours are exceptional because of the driver/guides - they are real local characters, have a host of fascinating stories & local insights that lift a routine 'tour' into the realms of an enthralling insiders track on the city & its people.

It was a surprise to me to find that Broken Hill has so many famous artists, well known in art circles around the world. I asked artist Ian Lewis why this small outback town (actually its much bigger than I originally thought & is officially a city) had developed & attracted so many Australian artists. He was quite certain about the reason - its the light, its so clear, pollution free, the big open spaces & the way the intense heat causes the land to glow & shimmer. Jack Absalomb, Howard Steer & Pro Hart are probably the most well known Broken Hill painters. Some are landscape painters, some focus on humor, others tell stories in paint, often raising significant political or historic issues; but always they are set in the great Australian outback. 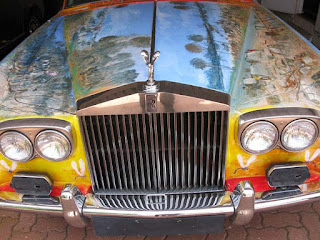