I finally made it from London to Sydney & with no significant hitches; but its not the absolute end of my trip as I decided to travel the entire length the Indian-Pacific from Sydney to Perth. 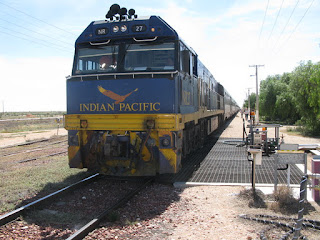 The train is full to capacity although shorter than usual & many of the passengers are groups that have been on a ocean cruise around Australia & are now on route back to Perth by train.

The Indian-Pacific is one of the world's great train journeys, crossing the Australian continent from east to west, from the Pacific Ocean to the Indian Ocean. I'm backtracking my route to Adelaide but this time in the greater comfort of Gold class.

The difference between Gold & Red sleeper/seat is enormous a bit like staying in a nice hotel verses camping. Red service has not frills - communal showers & toilets are at the end of the carriage & a canteen style carriage sells drinks, snacks or ready meals although some people bring a picnic.

Gold passengers on the other hand have private cabins which convert from daytime seats into nightime beds, twin shares have ensuite shower & toilet although single cabins have to share shower & toilets with other passengers in their carriage. There is a comfortable lounge & bar as well as a separate restaurant quality dining carriage for breakfast, lunch & dinner which is inclusive with a Gold ticket.

An interesting half way house is a Red Sleeper cabin which has all the benefits of a small private cabin with proper bunk beds but none of the ensuite or dining frills.

I opted for the early dining sitting which were 7am, noon & 7pm. The food was consistently good with a excellent choice including fish, kangaroo & vegetarian options, all of which are freshly prepared onboard & served at tables for 4.

Breakfast was comprehensive & lunch excellent but they pull out the stops in the evening. A typical dinner menu starts with regional wines - Hunter Valley & Adelaide Hills from Sydney to Adelaide & then Margaret River & Swan Valley selections on the run into Perth. Starters included smoked salmon or Lentil soup, mains included pepper steak on sliced potatoes, various vegetables followed by a sticky or chocolaty desert or a regional cheese plate.

I took the Whistlestop tour at Adelaide but I'm afraid it was a dull & uninspiring script delivered by a bored driver. Nothing like the the interesting characters running the tours at Broken Hill who were chatty, enthusiastic & full of stories about people & sprinkled with fascinating little snippets of history.

We entered the formidable Nullarbor Plain around 8.30 next morning. This ancient seafloor is pancake flat in every direction, limestone rocks lay scattered like discarded builders rubble & only the grey/green tufts of saltbush & spinifex seem able to withstand the searing heat. I was thinking what a bleak & barren landscape it was until the train made an emergency stop as we hit a herd of camels. I saw at least a dozen camels making off at speed on either side of the train but at least one never made it. Camels released after the railroad was built unexpectedly thrived in Australia's harsh interior, they have multiplied & are now numbered in the 10's of thousand. Wedge tailed eagles soar & swoop in the sky, which suggests there must be plenty of small creatures for them to eat - so its just bleak & barren to us humans. 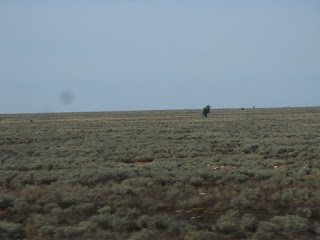 The ghost town of Cook is in the middle of the Nullarbor, now with just 2 residents to help refuel & re-water the train & provide accommodation for change-over drivers. It used to be a thriving railway town & still has the remnants of small town life - rows of houses, rusted vehicles, a school, hospital, a sand filled swimming pool & a 9 hole golf course without a blade of grass. Now its home to migrating sparrows & swallows although the real owners are flys. 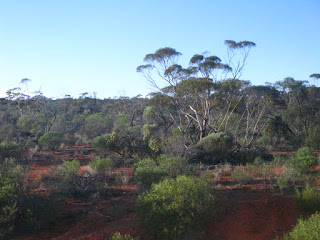 We arrive in Kalgoolie around 7pm, some people take a trip to the Big Pit, one of the most productive gold mines in the world, some of us visit one of the many pubs in town but no one admits visiting the famous Kalgoolie whore house. Back on the train the bar closed just after 9pm, bringing an abrupt end to the simmering party mood of the cruise crowd who had been travelling together for the past 2 weeks.

Next morning we wake to the rolling farmland of southern West Australia, an amazing contrast to the Nullarbor & the train arrives at East Perth station spot on time.
Posted by Peter at 19:57