Its 10 years since I was last in the old backpacker hangout of the Khao San Road in Bangkok. I found it a great fun & really useful as backpackers were coming from & going to a whole range a places in the Far East, so it was an invaluable source of tips & insider knowledge. The road was full of good cheap bars, or at least my recollection tells me that, along with stalls, street traders, food vendors, hair braiders, street entertainers, henna tatoo artists & rip off merchants - all having grown up around this travellers haunt. 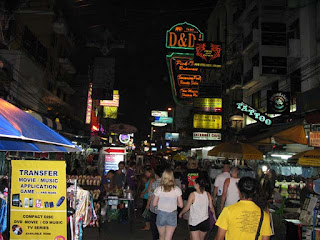 Today was one of those great revisiting disappointments as it seems to have lost all its originality & colour. This sadly happens to places of renown that become popular. The crazy illuminations, huge crowds & wandering vendors are still there but its now turned into a highly commercialised Asian tourist street market with little or no uniqueness.

Its full of holiday makers & shoppers & I couldnt find one decent bar to just sit in; they've all become more profitable restaurants with uncomfortable plastic seats so customers don't dally too long. And the beer was really expensive, almost 4 times what I paid yesterday in Cambodia. The banana pancake & noodle vendors have given way to Kebabs & popcorn sellers & down one end of the street there's a Subway, KFC, Burger King & MacDonald's - that must surely say it all. 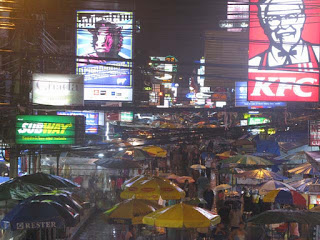 Interestingly the place I remember as a bit of a backwater, the parallel Rambuttri Road, is now buzzing with life, there are plenty of bars to lounge in & street vendors still sell local food. The beer is almost half the price of the KSR & music is less monotonous, although bars still try to out play each other. There were a couple of musicians while I was there & local people havnt been driven away. 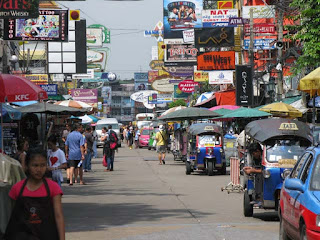 There are of course plenty of backpackers on the KSR but they're a minority & I suspect they're disappointed at being mislead by up-to-date but out-moded guide books as well as seriously dated web information. I'm sure the insider grapevine suggests there is somewhere else for the real cool dudes to hang out & I bet its somewhere in Cambodia or Laos.

After one misrable night I moved across town to the almost brand new Siam Kempinski hotel beside the Siam Paragon shopping Mall (Siem Square area). The Siam Paragon is like another world from the Khao San area of town - 7 stories of retail outlets and there are another dozen similar Malls within a 10 minute walk on the Ratchaprasong Skywalk.

The Skywalk is not quite as wonderful as it sounds as it runs underneath the skyrail system but compared to the turmoil at street level its pretty good walking.

The malls aare pristine in every way, neat little shops and neatly dressed shoppers; everyone looked smarter than me, even the cleaners, but it did remind me of the Stepford Wives. It was very American in style & seemed to be a place for a family day out - instead of the park. But I must admit that its bliss to walk into the cool mall from the hot & muggey streets that are often fume filled.

The basement of the Paragon had a food hall that was so vast that I lost count of the number of outlets but they ran into the hundreds. There were virtually no tourists & almost no English signage so I settled for the Curry House until I realised there were more than a dozen people standing outside waiting for a table.

The food hall reminded me of childhood days at Battersea Fun Fair - there was a heaving press of people, an almost deafening hub-bub of noise with the occasional shriek. Pans & crockery clanked & clattered, intermmitant music throbbing and there were regular megaphone calls for 'Mr Jumsai & family to please come to their table' - I'm guessing this last bit.
Posted by Peter at 05:55