Travelling is a funny thing, you're keen to see new places but this also means you have to leave the new places you're already at. So far I've enjoyed everywhere I've been, on-route from London, but the one place I absolutely did not want to leave was Mongolia. Its fantastic, my favourite place by miles, three brilliant days was by no means enough; I need at least another week just to scratch the surface of this amazing place.

Mongolia is three times the size of France but with only 2.7 million people & more than half that population live in Ulaan Baator, so it has genuine vast open spaces. It also means that their nomadic culture is real & not just a tourist figment from the past. City folk are obviously not nomadic but most keep contact with their roots & frequently visit nomadic relatives at weekends & holidays. City folk also make up a major proportion of the 'tourists' staying at the many Ger camps around the country.

I had better quickly mention that according to local people, & their bank notes, it is Chinggis Khan & not Gengis Khan. The size of the old Mongolian Empire puts the Roman & the British Empires well into the shadows as Mongolian rule stretched from Korea across China & as far west as European Bulgaria. The capital of the Empire was moved to Beijing so China's mumbled historic claim over Mongolia is in fact completely back to front as Mongolia also has a legitimate historical claim over China!

I was also wrong in an earlier blog by suggesting that they don't use Cyrillic script - they do - its just not so evident in the capital city as it is in the countryside. From Ulaan Baator city centre you can see the mountains surrounding the city on all sides & the temperature can plummet at night because its on a high plateau around 4,000 feet above sea level.

On a journey 50 miles north east to Terelj National Park we passed camels, cashmere goats, yaks & trained hunting eagles, all in the most glorious Alpine-like countryside of mountains, valleys, rivers, little villages & lonely looking Gers. Being September we had missed the real Naadam (the Mongolian national games) in July but the train operator had persuaded some local people to put on a mini-Naadam for us.

Of course it was touristy, but these games have been entertainment & celebration since the days of Chinggis Khan. The Naadam may even pre-date the Greek Olympics & were probably a way of diffusing tensions between warring tribes.

All the contestants at our mini-Naadam were genuine Naadam combatants & the wrestlers gave no quarter as they fought to win, the archers focused their aim & pride drove the horsemen to the finishing line. The champion wrestler got to distribute little cakes, biscuits & Airag - fermented mares (horses) milk which was like a thin tangy yoghurt, but with a mild kick. 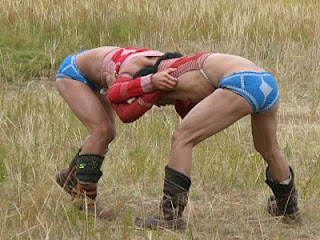 Lunch was a supurb Mongolian meal, cooked by local people, unlike our disappointing professionally cooked restaurant dinner in Ulaan Baator the night before. There was a range of mixed salads including kimchi, a thick lamb soup, Mongolian bread in the form of small deep fried discs. Then came ground meat wrapped as dumplings & steamed (Buuz) along with the very moreish deep fried dumplings (Khuushuur) & the finale was Khopkhog - mutton cooked in the age old way - for several hours in a sealed container of red hot river stones. The meal was topped off with home made yoghurt & blueberries. I think this has been the best meal since London, except the Kamchatka crab salad at the Kempinski in St. Petersburg.

What really made it a first class meal was that it was full of local authenticity served in a large Ger surrounded by mountains & rolling grasslands - absolutely unmissable.
Posted by Peter at 13:40