Sydney is outrageously expensive, it took hours of internet searching to find a 2 star hotel that averaged $150/night, anything slightly better jumped to $300. 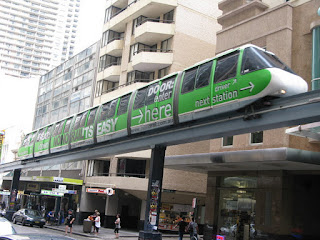 Sydney pubs routinely charge $5 -7 for a small local beer (half pint) unless you opt for one of the seriously dingy drinking dens & then its $4.50. I realise that beer is not a typical family guide to the weekly supermarket shop but I'm sure its a guide to general costs (in my mind). No wonder Aussies flock to Indochina where similar beer costs from 15 - 50 cents & a good quality side-street restaurant meal costs around $4.

Its amazing to find that generally it seems cheaper to live in the UK, where wages are higher, than Australia - what's happened to the Australian dream?

Incredibly the city seems to be in the dark ages for WiFi, the few places that do have it want $10/day to use it whereas supposedly backwards countries like Vietnam & Cambodia have free WiFi available in every little corner bar & cafe.

I'm doing all the usual touristy things - the Rocks, the Bridge, the Opera House, Harbour ferries, Bondi Beach - interestingly, browsing through the mountains of tourist literature they all seem to be selling the city primarily on opportunities for shopping & eating. No matter what the destination or activity, its about what you can buy & eat there - how weird is that - or is it just me? 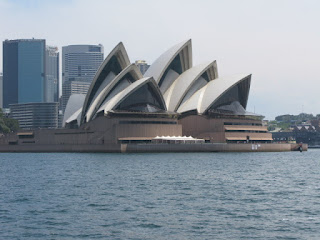 My best eating experience was at Harry's Cafe de Wheels in Woolamaloo where I had a hot dog but it came with chilli-con-carne, mushy peas, garlic, onions, cheese & chilli sauce - an absolute mess to eat, but oh so tasty for $5.90.

Sydney seems to be a schitzophrenic place, I've not seen so many grossly over-weight people since my last visit to America's Mid West. Then, as I walked along the harbour path at Farm Cove I'd never seen so many joggers - so many that they were a serious pedestrian hazzard. From my hotel in China Town I was able to enjoy the company of Sydney's rough sleepers, many behaving very oddly - shouting & talking to invisible people, so they might be clinically schitzophrenic, but what about all the rest?

I climbed aboard a 333 bus from the city to Bondi Beach & was promptly thrown off, with some glee, by the bus driver. None of the useless tourist literature tells visitors they have to buy a ticket from somewhere else before boarding a bus. After trying 3 shops I eventually bought a $3.50 ticket & boarded the next bus to Bondi which was a 380 - that did bloody well sell tickets - what a shambles for visitors! I've got leaflets of where I can buy or eat anything under the sun but nothing about how to use the impressive but mysterious city transport system. 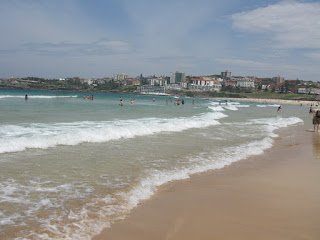 After a beer & a paddle I caught the 380 onwards to Watson's Bay for some of Doyles famous Barramundi & chips beside a lovely little sandy bay that is perfect for small childten as its on the harbour side (not the Pacific) so has no breakers. Actually I had better Baramundi in Darwin but Doyles has possibly the best restuarant views in town. 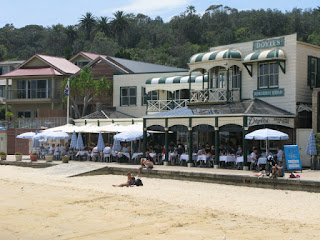 The regular ferry service ($5) took me back to Circular Quay, with fantastic views of the Opera House & the Bridge - completing a nice circular tour at a fraction of the price of an organised tour. I had planned to take the free city circular bus (555) but instead walked down Pitt Street to look at what turned out to be insanely overpriced opals -$4-6,500 for something quite nice!