Having previously travelled the northern part of West Australia from Broom to the Mitchell Plateau, this time I thought I'd explore the lush south-west. I hired a car in Perth & drove down to Mandurah which was a bit too many boardwalks & marinas for my liking so I carried on to Bussleton. I spent a couple of nights at the Paradise Motel - a bit of a mis-use of the English language, but it was still better than my Sydney hotel & half the price.

Its late spring here (November) & the weather is surprisingly blustery with occasional short showers but its pleasantly warm & much nicer than the scorching heat of high summer.

Bussleton has the look of a wonderfully old fashioned seaside town, all low-rise buildings, a high street without boring multinational chain stores & a beautifully uncluttered beach. The beach front has a cafe, bar, ice cream parlour & a children's playground but none of the tat & commercialism that sadly litter every seaside town in the UK. 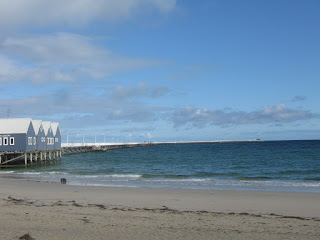 Well back from the beach front there are several motels, taverns, supermarkets, caravan & camping areas & a row of the usual fast food joints.

Bussleton is in Geographe Bay which is a good whale watching location, especially from the end of the unbelievably mile long jetty. Its so long that a little train runs to the end where an underwater observatory is the year round attraction.

I made a daytrip down to Margaret River, passing many of the 120 vineyards of the region but the town was just a disappointing tourist shopping street, I'm not sure what I was expecting, but it wasnt that. A few other people I met also said how disappointed they were with the town. Maybe its because the wine has made Margaret River such a famous name that visitors expect something special. 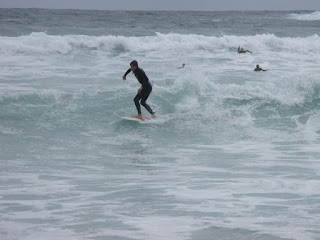 I went out to Surfers Point at the end of the actual Margaret River where there were good breakers & some enthusiastic surfers. The tiny village of Prevelly sounded so Cornish that I had to take a look & it did have a Cornish air - a sweeping bay, lovely sand, backed with large dunes, rolling surf & rocky headlands.

I headed on further south to Walpole a coastal town on the Southern Ocean to see the giant Red Tingle forests, some of the trees are 450 years old! It was a glorious drive through seemingly endless forest & I only passed 1 vehicle all the way.

The southern landscape is rich & green, heavily wooded in places & well tended in others with wheat, cattle, vines & orchards. The landscape has a familar look to a European eye, until closer inspection shows that trees, bushes & grasses are all completely different species.

Walpole looks to be a significant town on the map but its incredibly tiny with just 2 motels & a dozen very practical shops - hardware, agricultural supplies, grocers etc but it manages to have a well staffed tourist office. There's no pub just bars & restaurants in the motels but at doesnt matter as all the charms of the area are along the coast or the inland forests. 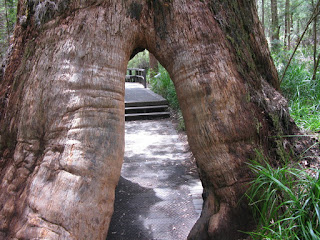 A few miles east of Walpole is the famous tree top walk - The Valley of the Giants. The Red Tingle trees are said to be the largest & the most ancient of the Eucalyptus tree family. The walk through the grove of gnarled veteran trees is rather haunting when its deserted & the 40m high canopy walk is a novel experience - looking down onto a woodland. Unfortunately, noisy visitors ensure that any interesting wildlife are kept well away. 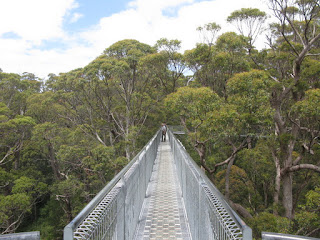 My final destination was Albany which is a charming small town (officially its a city) & West Australia's first European settlement. The towns tourist information office directed me to the Albany View B&B which was a spacious suite - the nicest & the best value accommodation I've had in Australia. Strangely all 3 sets of fellow guests were visitors from the UK.

Albany is an excellent base for exploring the region as its got plenty of bars, restaurants, coffee shops, general stores & what a treat to be able to freely park in the attractive High street. The rugged coastline has lots of scenic drives, some leading to fabulous deserted beaches & others to the well known Mount Barker vineyards. 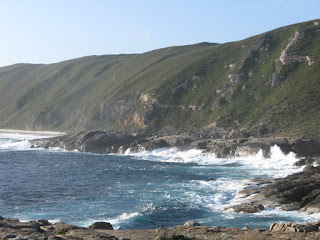 In 1914 Albany's vast King George Sound was filled with a fleet of 40 transport ships & five naval escort vessels waiting to transport 30,000 men to Gallipoli; most were never to return. Because Albany was their last sight of Australia the city has become Australia's ANZAC memorial capital.

Albany is a great whale watching location from June to October & it used to be a busy whaling port but now the old whaling station has been turned into a museum that graphically shows exactly what whaling was all about.

I returned to Perth on the 16th & had my worst day of the whole trip. A friendly cop from Williams gave me a speeding ticket for exceeding the limit by a few mph on a deserted, arrow straight stretch of road in the middle of nowhere. Then, when I arrived in Perth I couldnt find any accommodation - everywhere was full. I tried every hotel in Fremantle & Cottesloe & then circled Perth looking for non-existant motels.

Eventually I drove into a motel on the Great Eastern Highway that declared it had No Vacancies. In desperation at 9.30pm I was going to ask for suggestions but the receptionist was in the mist of a telephone argument with a pending guest & luckily for me he swore at her - so she gave me his room - thank heavens for gormless halfwits!

I couldnt stir up much enthusiasm for exploring Perth, I was put off by the street parking fee requirements & being stopped & breathalysed for no apparent reason. But its probably that I'm just about travelled out & want to go home.
Posted by Peter at 20:00