This is one of the highlights I've been looking forward to - the luxurious Orient Express train from Bangkok to Singapore. Yet again the rising flood waters were making themselves felt so after gathering at the private lounge on platform 12 at Hualampong station passengers had to transfer by bus out of Bangkok to meet up with the train that had been parked several miles west of the city, at Ngew Rai station, as a safety precaution. 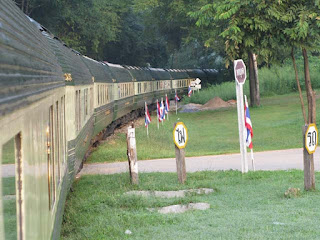 The trains green & cream livery & its gold lettering gleamed in the sunset but not as brightly as the ever-smiling carriage stewards who quickly settled passengers into their compartments which will be home for the next 3 days. 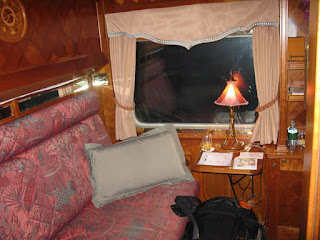 The Orient Express has a grand history dating back to the early days of steam. From 1883 it routinely carried passengers from London to Venice & on to Istanbul but the increase in air travel in the second half of the twentieth century brought these haydays to an end. But it never completely died & the Venice Simplon Orient Express continues to run from London to Venice but its no longer a scheduled service.

Fortunately not everyone sees travel as just a practical necessity for getting from A to B, there was still a demand for stylish travel & 1993 saw the launch of the Eastern & Oriental Express. Its the only true luxury train in Asia & the first to carry passengers seemlessly from Bangkok to Singapore. Its concept & design is modelled on the style & luxurious traditions of its older European sister but with some added asian flair.

Although it connects 2 of Asia's great city destinations the E&O is all about the experience of the journey rather than where it goes. Your personal compartment steward has learnt your name before you've settled into your cabin & he's more butler than train official as the handy bedside bell indicates. 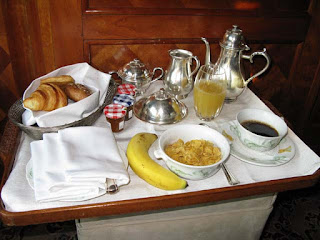 He serves breakfast & afternoon tea in your cabin, updates you on the days activities, deals with all the border formalities on route & reconfigures your compartment for day & night use - invariably when you are occupied elsewhere on the train.

There is a sumptious feel, even to the smallest cabins, with their elm & cherrywood diamond marquetry, thick carpeting, hand embroidered window pelmets & stylish brass lamps & fitments. The en-suite has Bulgari toiletries & dressing gowns, its obviously limited in size although the shower cubical was sufficiently spacious & delivers a good shower. Luggage space is limited & big items need to be stored in the luggage car

In the daytime the bar & the open-sided observation car are the hub of activity but in the evening this generally transfers to the larger Piano bar that stays open until the last guest retires, which for us was occasionally 4am. Passengers who want a less exuberant evening can opt for the peace & quiet of the second bar or the Saloon car.

The rotating seating plans in the restaurant car were a great way of breaking the ice & enabled guests to get to know each other. There was a good mix of honeymooners, businessmen & wives taking a break and young retirees taking a trip of a life-time. After the first excursion people began to relax & the observation car was the real social hub. 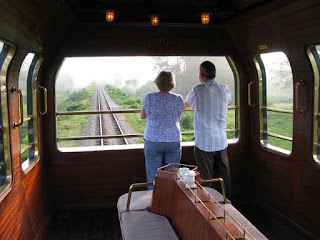 Dining is an elegant affair, people dressed up for the occasion & tables were laid for fine dining with silverware galore, fine crockery & hand cut crystal glasses.

It is hard to image a consistent stream of 5 star gourmet fare being produced from the limited space of a railway kitchen but that's just what French chef Yannis Martineau managed day after day.

Menus are are based on years of experience & Chef Yannis has been the E&O chef for past 4 years & previously worked on the European Venice Simplon Orient Express. Menus are designed for a broad range of tastes & in essence are a subtle blend of European styles combined with Asian spices, so there's always an asian theme but its also familiar.

Chef Yannis has 14 kitchen staff (7 Thai & 7 Malay) but has also cleverly trained local pastry chefs from Chang Mai to Singapore so is able to collect fresh bread & pastries, to his own recipe, every day as the train passes through.

Private cabins are a retreat for some quiet time but there is nearly always something going on in the public carriages. Apart from the evening pianist we were entertained with an afternoon recital of Thai music played on the stringed Kim; an exotic fruit tasting session; a Malay dance troop & excursions to the Bridge over the River Kwai in Thailand & Penang Island in Malaya. 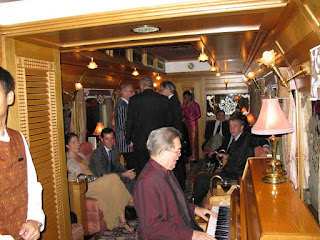 The average train speed is 60kmh & it runs on a narrow gauge track but the train itself is a normal width so there's a good bit of rock & rolling especially in southern Thailand where the track is in poorer condition. I was jolted awake on several occasions as the train lurched across warped points or sections of wonky track. This is not a suitable trip for wheelchair users or anyone unsteady on their feet. 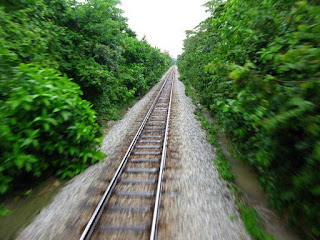 I loved the landscape, it was a mixed bag of tropical jungle, rice paddy fields, sugarcane, banana, coconut, rubber trees & palm oil plantations along with all manner of exotic fruits. In between nature there are rural house, sizable cities, some scruffy villages & during 2011 there was construction of a new rail track through Malaysia. So all life is there & its undoubtedly the perfect way to explore some of the most iconic Far Eastern destinations in a unique style that really is a leisurely step back into the way travel used to be