The E&O excursions were well choosen as unique places to visit on route; the first days trip was to 'the Death Railway' a major pilgrimage site for many people from Europe & Australia. Initially there's nothing special to see if you don't already know the story. 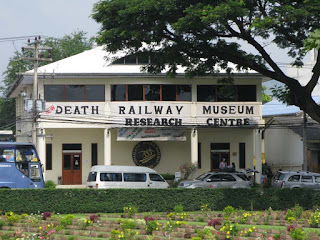 After crossing a wooden trestle bridge clinging precariously to the limestone cliff face we arrive in Kanchanaburi - location of the infamous Bridge over the River Kwai, a key part of the Thailand to Burma railway line. The famous wood & bamboo bridge featured in the film was only a temporary bridge & the existing steel bridge was always intended to be the final bridge. 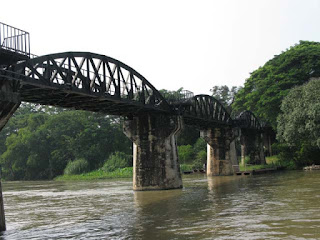 The 415 km railway route had to be carved out of rock & jungle as well as bridging fast flowing rivers - formidable terrain even by todays construction standards. The Japanese amassed 250,000 local labourers & 68,000 prisoners of war to work as forced labour. This included 30,000 British & 13,000 Australian prisoners & not many of them made it back home.

We took a river raft under the bridge down to the Thailand-Burma Railway Centre opposite a poignant war grave site, one of six that are still maintained in pristine condition. The museum & research centre is well organised but is horrific & records in great detail this infamous event.

Explanations for the unbelievably barbaric behaviour of the Japanese were that the railway builders themselves were under threat of death if they did not complete the railway construction within 12 months because of Japan's desperate need to get supplies to their troops in Burma. A POW was considered to have disgraced themselves by surrendering & the Japanese cared nothing for their own sick or injured troops - so why would they care about foreigners whom they despised.

The museum itself is a detailed record of everything that is known to have happened, names of POWs, research facilities, living conditions & what happened to the guards after the war.

The second excursion was to Penang Island & the adjacent mainland area of Butterworth in Malaysia. This was acquired by the British in 1786 as an East India possession. They brought Indian traders & labourers, Chinese came as did Arab traders so along with the British colonials it beccame very multicultural & today there are large, vibrant Indian, Chinese as well as Malay quarters of the city.

A ferry & the longest bridge in southeast asia (13.5km) connect the island to the mainland. Half of the island is still tropical forest & there are some impressive beach resorts but we only had time to visit historic George Town, Penang's capitol.

Exploration of the old town was by trishaw - something I had resisted on my tip across SE Asia as to me passengers always looked like invalids being wheeled around in ancient bathchairs. We arrived just in time for a tropical downpour so it was not as enjoyable as it might have been. The trip ended with a Pimms at the very grand colonial Eastern & Oriental hotel on the sea front - clearly the most prestigeous place to stay in Georgetown.